All Schools Across The Country Will Remain Closed Until January 10th, 2021

Today on Monday, November 23rd, 2020, Federal Education Minister Shafqat Mehmood declares that all the schools from across the country will remain close until January 10th, 2020. The decision was taken because of the rising cases of corona patients in the country. The educational institutes will be closed from November 26th, 2020 and the following is the complete schedule of the schools’ activities:

The decision was announced during the Inter-Provincial Education Ministers Conference (IPEMC). The federal education minister reveals that the health of the children is our first priority. However, he added that the examination session for December month will be postponed. However, it was also decided that the micro-decisions would be done at the provincial level.

Punjab education minister Dr. Murad Raas declared that the students enrolled in the Punjab schools will be promoted to the next classes based on their homework. He also declared that the boards’ examination sessions that are commenced in March will be delayed to May or June 2021. Teachers will be required to visit schools twice a week. During this visit, teachers will make sure that the quality of the homework is up to mark. He further remarks that if the schools are going to be closed to protect the children, then the parks, shopping bazaars, and other recreational places will also be closed.

Baluchistan government had already declared early winter vacations and these were also extended last week. However, there is no decision has come to see about the promotion policy in the Baluchistan education system. For further notifications and policies regarding the closure and reopening of schools across the country, the users and students are advised to keep visiting us. 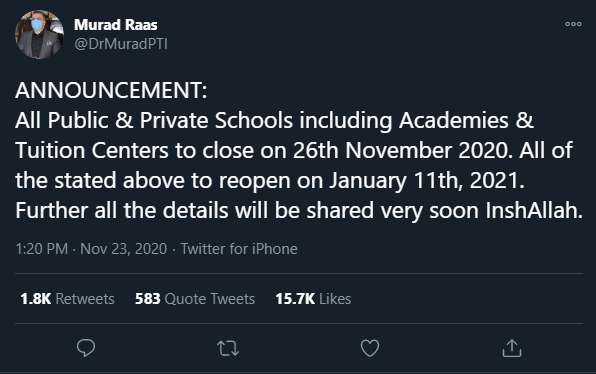 All Schools Across The Country Will Remain Closed Until January 10th, 2021